All types of bees love these Haas Halo hydrangeas!

Haas Halo on the terrace with bees

What’s up with my milkweed?

I have a large patch of asclepias incarnata that has some leaves that are turning black and some that are shriveling. Whole plants are dying off.
I showed Dr. Matt Frye, an entomologist at Cornell University, a picture of this problem. His diagnosis, a one two push of the aphids. The aphids secrete honeydew, and that caused sooty mold to proliferate. The solution, organic horticultural soap to kill the aphids. It did not hit my asclepias Syriaca so far was not affected, which is good for the Monarchs in our garden.

Did you know there was radioactive waste from processing phosphate ore into phobic acid which is used in fertilizer? There are more than a billion tons stored in “stacks” at 25 facilities in Florida. Now a reservoir that stores this material in Manatee County Florida, near Sarasota, is in danger of collapse and nearby homes are being evacuated.
According to The Center for Biological Diversity “Radium-226, found in phosphogypsum, has a 1,600-year radioactive decay half-life. In addition to high concentrations of radioactive materials, phosphogypsum and processed wastewater can also contain carcinogens and heavy toxic metals like antimony, arsenic, barium, cadmium, chromium, copper, fluoride, lead, mercury, nickel, silver, sulfur, thallium and zinc.
For every ton of phosphoric acid produced, the fertilizer industry creates 5 tons of radioactive phosphogypsum waste.”
In 2020 groups sued the EPA for approving the use of this radioactive waste in road construction.
This is another really good reason not to use synthetic fertilizer on your yard and garden!

“In Hawaii, we know about the importance of protecting native plants, as our state is home to 44 percent of our country’s threatened and endangered plant species,” said Senator Hirono.

I am so honored to be receiving the 2021 Margaret Douglas Medal for Conservation Education from the Garden Club ofAmerica.
GCA changes hearts and minds with education and friendship of strong women in leadership roles in their communities. So fortunate to be part of this phenomenal education that has been working to protect our environment since its inception in 1913.

Brood X Cicadas are coming to the Northeast, what do we need to do in our gardens?

Brood X Cicadas hatch every 17 years in the Northeast, and this is the year. Cicadas that have been underground for 17 years emerge and breed. The females deposit eggs on in grooves on tree limbs or branches. This can kill small branches, but doesn’t harm established trees. Nymphs feed on the tree in the groove, then drop to the ground where they burrow in and feed on the root. They feed on the roots and tunnel for 17 years, and then crawl up from the ground. They shed their skins and mature, mate, and this cycle starts again. When they emerge they are a feast for wildlife and if abundant produce a really loud chorus.
Enjoy the show, including the wildlife that are chowing down on them. The other thing to do is to net young trees with 1/4″ netting to protect them.

Look who’s hiding in our leaves!

Well, yes, I know it is just about spring, but this XERCES Society campaign to protect pollinators captivated me!

A native fungus may combat the invasive Tree of Heaven

Ailanthus anltissima, or Tree of Heaven grows quickly and crowds out native trees and shrubs. An invasive from Asia, it evolved with many insects that are pests here, and the tree is one of their favorite places to live. In fact, Pennsylvania uses them as a “trap tree” to lure the invasive Spotted Lantern Fly. It is alelopathic, secreting substances into the soil that inhibit surrounding plants, helping it to wipe out native trees and shrubs.
A recent study shows that specimens of Tree of Heaven that were given an injection of the fungus Verticillium nonalfalfae gives the tree a severe wilt disease that spreads rapidly to other Trees of Heaven. A commercial product is in the works, along with studies to confirm that it doesn’t harm native plants. The fungus is native to the Northeast US, and so far appears to be safe.
Fingers crossed, because this could be a boon to controlling this aggressive invasive without chemicals!

The Spotted Lantern Fly is an invasive and highly destructive insect. Here are some tips on dealing with it organically.

The latest research in a Cornell-led study that included Penn State, showed that two fungi, Batkoa major and Beauveria bassiana, could decimating spotted lanternflies in forests near Reading that had notable spotted lanternfly activity.

Found naturally in soil, Batkoa major and Beauveria bassiana are native fungi that cause disease in insects but are harmless to humans. Beauveria is already an ingredient in some EPA-approved biopesticides.

When the Sotted Lantern Fly encounters these fungi, it picks up fungal spores, which germinate and colonize the body, killing the insect in days. A white fuzz that emerges from the dead insect. That fuzz, in turn, contains more spores that can infecting kill other insects.

two weeks after spraying, the number of live lanternflies in the fungus-treated areas was about half as many as those in the control areas.

Other tips include:
-use tree traps to catch nymphs
–remove host plants
–scrape egg masses on trees, cement blocks, cars, rocks, and any other hard surface, into a container filled with alcohol or hand sanitizer, and keep them there for disposal.

–Tree traps:
Nymphs frequently fall to the ground and climb up trees, so wrap the trunks in sticky traps to catch the nymphs. Sticky bands or funnel style traps work. Birds and small mammals can get stuck to the sticky traps so you can a. cage the band in wire b. use a very narrow sticky trap c. use a funnel trap instead.

-Host plants to be removed:
Tree of Heaven is the preferred host (an invasive it is good to remove!)
Oriental Bittersweet is an invasive vine that is also a host

–Neem oil and natural OMRI listed pyrethrins can be used.

A study in Nature Sustainability is the first large scale study of the impact of neonicotinoid pesticides on bird biodiversity in the United States. The study showed that the increase in neonic use between 2008 and 2014 led to a 4% decrease of grassland bird biodiversity and a 3% decrease in insectivorous bird biodiversity every year. This is expected to increase to 12% and 5% annually as the effects compound. Other bird species were affected too, but to a lesser extent.
Neonics are the most widely used pesticides, used on over 160 million acres of genetically modified crops, and even on many native plants grown for sale to homeowners. They target neuro receptors involved in neurologic development. Studies have shown exposure may lead to an increased risk of autism. These pesticides are not good for birds, bees, or us. And they stay in plants and soil for a long time, so buy plants that have not been treated with neonicotinoids.

I pledge to take care of my yard without synthetic pesticides, weedkillers and fertilizers except on rare occasions to resolve an infestation or to improve habitat for native plants and wildlife.

I also pledge not to throw pharmaceuticals or chemicals down my drains or toilets. 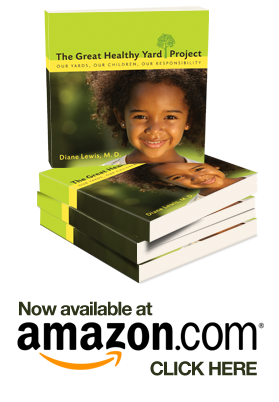 ©The Great Healthy Yard Project. I pledge to take care of my yard without synthetic pesticides, weedkillers and fertilizers except on rare occasions to resolve an infestation or to improve habitat for native plants and wildlife. I also pledge not to throw pharmaceuticals or chemicals down my drains or toilets.